The Debating Matters Changing Age event, in partnership with Newcastle University, took place on Thursday 29 April 2010 at the King’s Road Centre, Newcastle University. The day saw eight schools from across the North East will come together to consider the medical, moral and social issues facing society’s ageing population.

Newcastle University’s ‘Changing Age’ programme is a year-long series of events and activities organised by the university, which houses the prestigious Institute for Ageing & Health (IAH). The IAH brings together clinical, social and computer scientists, engineers, and researchers in a variety of other fields, to address the increasingly important issues of how and why we age, the treatment of associated disease and disability, and the support of through-life health, well-being and independence. As well as the programme celebrating Newcastle University’s achievements in ageing-related research over the past 40 years, it will also be a platform for contemporary debate and discussion on age related issues. 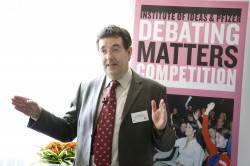 As well as a series of Debating Matters debates, the day began with a fantastic ‘In Conversation’ lecture, given by Professor Tom Kirkwood, Director of the Institute of Ageing & Health, who celebrated the fact that we are all living longer than ever before, in much better health, and considered what the future of ageing might look like; and a ‘Question Time’ style panel of eminent commentators and scientists where students can continue to explore the ideas and issues with a distinguished guest panel.

In a series of Debating Matters debates, students from across the North East considered the issues around older mums and radically extending the human lifespan. The day started with a fascinating opening speech from Prof Tom Kirkwood of the Institute for Ageing and Health who celebrated the fact that we are all living longer than ever before, in much better health, and considered what the future of ageing might look like. Prof Kirkwood was then engaged in an exchange of ideas with Dr Iain Brassington, bioethicist at the University of Manchester and Dr Kevin Yuill, a historian from the University of Sunderland, as well as some pertinent questions from the student audience.  The day finished with a ‘Question Time’ style panel of eminent speakers including Dr Jack Watters from Pfizer; Anne Johnstone of The Herald; Prof Jim Edwardson of the IAH; and Sean O’Connor, co-adapter of the acclaimed ‘Juliet & Her Romeo’ at the Bristol Old Vic, who fielded a range of questions on ageing from the young and engaged audience.

Prof Tom Kirkwood, Director of the Institute for Ageing and Health, said the event was:

“A fantastic day…I was really impressed with the way school students engaged with some really challenging questions for contemporary society. I think the debate format allows the students to engage with the discussion in a really creative and intelligent way.”

And as an example of the lively and engaged student audience, Annie Cocoran of Gosforth High School commented that:

“(it was) really enjoyable…particularly the interesting mix of older and younger people discussing a really important social issue.”

We would like to thank Newcastle University for their partnership in this project, and for helping us create a unique event for schools in the North East.

If you are interested in working in partnership with Debating Matters, contact the competition’s director, .(JavaScript must be enabled to view this email address).